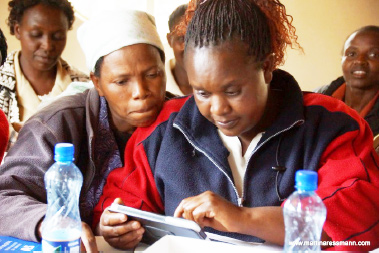 Sixty seven percent of Africa’s population, estimated to be about 1.13 billion, now has a mobile phone, according to an article published by The Guardian in June 2015. The mobile penetration in the sub Saharan Africa region is expected to increase to 79 per-cent in 2020. But what does this rapid growth mean to mobile phone users, especially to grassroots women in rural areas?

Despite the persistent challenges, such as unreliable networks and lack of electricity, the enhanced spread of mobile phones has increased grassroots women’s ability to communicate, access information, network, advocate and engage in a more timely manner. This is absolutely an important step for rural communities and women, in particular, who had been marginalized due to poor infrastructure. Farmers can access information about market prices, farm inputs, etc. and even negotiate contracts without traveling long distances. Further, civil society organizations and governmental service providers currently explore ways to use mo-bile phone applications to provide technical advice to rural farmers.

“Mulika Mwizi” is a basic telephone handset and the only likely communication technology that the majority of rural women farmers may own or have access to. The gadget which carries a Kiswahili connotation that literally translates to “spot the thief” is a basic handset that allows one to only make and receive calls and often has an additional feature of a light facility similar to a torch.

The lighting is essential as most rural areas are not connected to electricity. While Africa prides to have expanded exponentially telecommunication coverage to the low income people, the reach is unfortunately limited in quantities and quality to women and girls living in poverty.

In 2012, GROOTS Kenya decided to expand the level of technology accessible to women farmers. The organization believes that by increasing the capacity of women farmers to track successes and challenges would unleash their potential and inspire them to spur their own development and influence positive change around them. Under the project entitled “Accelerating rural women access to agricultural market and trade”, each of the 131 organized groups were provided with a computer tablet and impacted with knowledge on how to use the gadgets. The women use the application that was installed on the computer tablet to collect information from their group members about their enterprise performance and savings/incomes on a monthly basis.

As shown in the graphic, this information is automatically transferred to a web based management information system. A number of reports are  generated automatically and provide the women farmers with a comparative feedback on their achievements. Surprisingly, the women have not only used the technology provided by the project but have gone out of their way to upgrade to android personal handsets with additional income and knowledge gained.