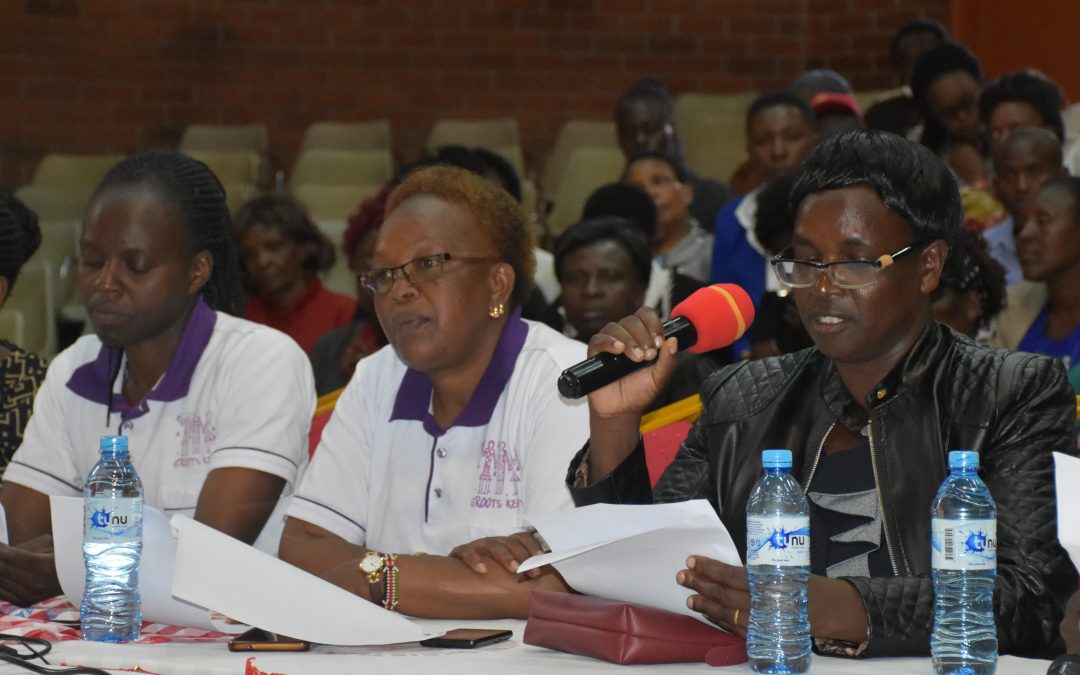 A lobby group has raised alarm over discriminative land reform programmes in Kenya against women and girls.

GROOTS Kenya-an organization championing for the rights of women and girls in a press release on Tuesday (a day the world marked International Women Day) argued that despite President Uhuru Kenyatta issuing more than 3 million title deeds between 2013-2017,only 10.3% of these land title deeds were issued to women while 85.6% were issued to men as per statistics from (Kenya Land Alliance).

Speaking during the event held at Christian Leadership Centre (Ufungamano) in Nairobi and attended by over 100 women leaders from across the country, GROOTS Kenya Chief Executive Officer Fridah Githuku was categorical that women should be involved in matters land.

She said this is the only way to ensure true economic empowerment.

“There cannot be true economic empowerment and justice if we continue to lock out women in land ownership” she said.

The Lobby group also raising concerns on the recent expiry of the Land Control boards and disparity in the new boards being reconstituted.

According to GROOTS Kenya’s recent assessment, most Deputy County Commissioners, who are Chairs of the land boards have not been advertised for these positions.

Instead, they are appointing new land board members through a process that does not guarantee fair opportunity to all.

“Grassroots rural women need be in the land control boards to protect and curb the unfortunate culture of illegal transfer of matrimonial property without spousal consent” said Githuku.

The Lobby is now calling on the DCCs to put in place an open procedure that gives all women an opportunity to apply and be appointed in the new land boards and that the Ministry of Land should hold the chairs of the land board accountable.

This even as the Community Land Act that was enacted in 2016 is yet to be implemented 3 years down the line with vacuum of information relating to compliance with this ACT still alarming.

It is for this reason that GROOTS Kenya has appealed to the Ministry of Land to move with speed in equipping local communities living in the group ranches/community land with accurate and open information related to compliance to avoid mis-information, exploitation and extortion of these communities.

“In developing the road map to the implementation of the community land act, the government should include punitive measures for group ranches that exclude women in the leadership” said Githuku.

While noting that the Government of Kenya has established affirmative funds WEF, Uwezo Fund, YEDF, and NGAAF, GROOTS Kenya argues that this is not enough to support rural women’s active participation in the mainstream economy.

According to the lobby group, the government should explore options that allow commercial banks to extend sufficient and affordable credit to women including strengthening of the credit reference bureau.

The county governments also being urged to move with speed and invest in climate change adaptation through rural farmers.

The International Day of Rural women is marked annually to celebrates and honor the role of rural women by recognizing their importance in enhancing agricultural and rural development worldwide.

The International Day of Rural Women is a day to focus on both the contributions that we women make in rural areas and the many challenges faced.

It should be noted that next year, Kenya and the world, will mark 25 years since Beijing Platform for Action was adopted in 1995 and 5 years since adoption of the Sustainable Development Goals (SDGs).

The empowerment of rural women is essential for fulfilling these frameworks as well as vision 2030 and the Big Four Agenda which all aim at ending poverty and hunger, achieving food security and empowering all women and girls.

PHOTO/Pristone Mambili:A section of women leadership who gathered at Christian Leadership Centre (Ufungamano) in Nairobi on Tuesday for the International Women Day.