Without women, many communities would not survive. This is true not just for society in general, but especially the world’s agricultural workforce, in which women play a key role in sustaining and transforming the farming model. Women contribute to agriculture, food security, nutrition, land and natural resource management, unpaid and domestic care work. But despite their worthwhile contributions, rural women still lag behind men on almost all aspects of gender and development. This is why empowering rural women is very important- so as to maintain a thriving economy and provide for lives across the world, this international day of the rural woman.

GROOTS has and continues to empower our grassroots women in various ways. Our theory of change explicitly states to shift the perceived role of the rural woman as vulnerable or victimized, to empowered and effective changemakers of communities. Our Women Champions are our role models to this vision. 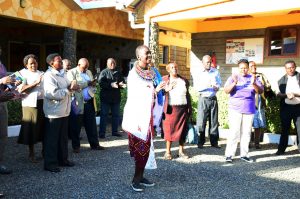 Mama Safi is one such example- born into Maasai traditions of marrying at a young age, traditions, lacking the right to get an education, and essentially losing your voice to express yourself freely. GROOTS had a hard time empowering her at first, but today she stands as the voice representing and fighting for the rights of Maasai women, educating them, encouraging a healthy and positive lifestyle for them.

Another such example is Josephine Kitheka who took her business aspirations and ideas to GROOTS to become a successful and financially independent woman. From struggling initially with loans to now being able to support her whole family and be able to buy land for herself, Josephine is a true role model in what empowerment can achieve. 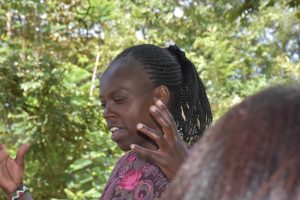 Lastly is Anne Gachambi Njuki. Coming from a community where men were always viewed as natural born leaders, Gachambi struggled to gain a footing for herself as a confident leader. It was with the intervention of GROOTS, Gachambi was able to be more involved in community affairs. In 2018, she received a global scholarship to attend a course on leadership for change from the Cooperative University College of Kenya. From this, she was nominated to represent GROOTS Kenya at the United Nations General Assembly conference in New York the same year. Through the support of GROOTS, Gachambi has been able to take her leadership to new heights, representing local voices and concerns at a global scale.

The first International Day of the Rural Woman was celebrated on 15 October 2008. A decade later, it is important that we continue to preserve and celebrate the accomplishments of rural women worldwide. Without the full engagement of rural women, a critical part of bringing change, achieving sustainable development goals of gender equality, poverty reduction, food and nutritional security, is simply not possible. Women transform into powerful change makers when provided with the necessary tools and resources, as demonstrated by the above examples. Equitable work share and benefits between men and women is just as important as developing fair and just policy systems, to continue to enable and empower women. Let’s create stronger and more resilient families, systems, governments that provide our women with the platform necessary to conquer the world! Happy International Rural Woman Day!