‘My name is Hannah Njoki Wachira, I am 43 years old and I come from Nyota area in Kuresoi North, Nakuru County. I joined GROOTS Kenya in 2013 after being mapped as a dairy farmer in the Accelerating Rural Women’s Access to Markets and Trade project.

I have never once regretted joining the movement because it has had such a positive impact in my life. GROOTS Kenya pulled me out of the depression I had drifted into after the death of my firstborn son. I immersed myself in the activities and trainings which prevented me from dwelling too much on the loss. They also empowered me economically with intensive trainings on dairy farming which led to increased production levels. I am now confident and driven. 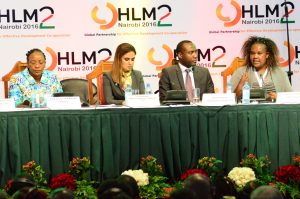 Hannah Wachira (right) at a HLM2 panel alongside Cabinet Secretary for Gender, Sicily Kariuki and other panelists

Before joining GROOTS Kenya, I was a Nursery school teacher(I still am), while my husband kept a small canteen. We were not invested in farming; we kept one cow “Madam” who would produce only one litre of milk in a day. GROOTS Kenya started by educating us on the best dairy and horticulture farming practices. I embraced semi zero-grazing and in less than a year, my cow was producing up to 9 litres of milk in a day which went up to 15 litres in another year.

From the increased income, I constructed a semi permanent house. I also enrolled my son in college.

I embraced horticulture farming and started borrowing commercial loans to improve and expand my farming. Additionally, I received training on lobbying and advocacy and together with a team of fellow grassroots women, we successfully lobbied for improved roads and maternity health care within our community.

I now know all the relevant stakeholders in my community and we collaborate on a variety of issues touching on women’s welfare.

Being in GROOTS Kenya has also honed my leadership skills and I am no longer afraid to take charge of any situation. I sat on the same panel with Gender Cabinet Secretary Sicily Kariuki at the 2nd High Level Meeting in Nairobi in 2016 to speak about the impact of agribusiness on small scale rural women farmers.

I am a leader in my local women’s group; Golden Ladies women group , which we formed under the guidance of GROOTS Kenya. We have managed to save over Ksh. 1 million through table banking. We used this money to dig boreholes or buy water tanks for all 19 members of the group. Later, we bought chaff cutters for all members.  This contributed greatly to our efficiency in farming and consequently to increased production levels.

Most of my neighbours have replicated the new farming practices and are now enjoying increased yields and income levels.

We can afford to transport farm produce to the markets easily due to the improved road infrastructure and earn higher profits because we have eliminated middlemen. There is reduced cases of theft of farm produce which can be attributed to the fact that a majority of people are busy farming and no longer have the time to engage in criminal activities.

Additionally, the community can now interact with the various leaders due to the linkages formed by the advocacy teams, and peace has been fostered among the various tribes that are part of the movement.

GROOTS Kenya is committed to lift rural women out of poverty, they treat us with respect and they have never given up on this worthy cause.”